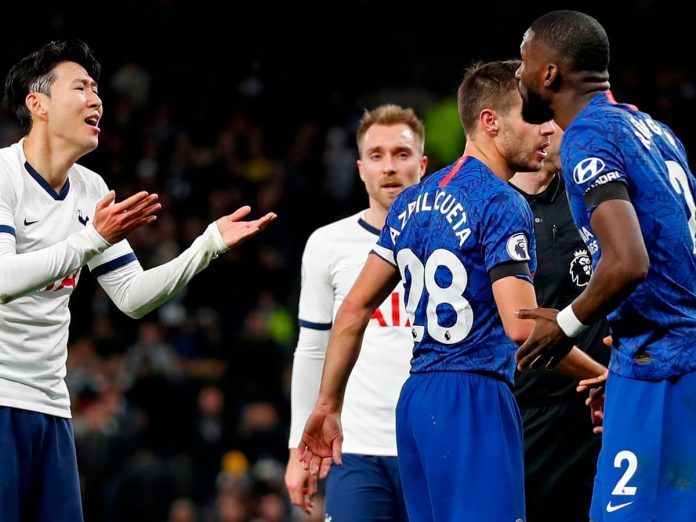 English football’s racism crisis took a new twist after it emerged that a Chelsea supporter was arrested for allegedly racially abusing Tottenham Hotspur’s Son Heung-min on Sunday during the Premier League match that had to be paused because a monkey chant was aimed at Chelsea’s Antonio Rüdiger by members of the home crowd.

Anthony Taylor, the referee, stopped play after Rüdiger claimed he had heard racist taunts during the second half of Chelsea’s victory over their London rivals. An announcement on the public address system informed the crowd at the Tottenham stadium that “racist behaviour from spectators is interfering with the game”. The announcement was made on two further occasions, in line with Premier League protocols.

Spurs have vowed to take the “strongest possible action” against anyone found guilty of abusing Rüdiger, who is understood to have been left angry following the latest example of the racism blighting the game. The alleged abuse occurred shortly after he had been involved in the incident that led to Son being sent off.

The Metropolitan police are investigating the alleged racist chanting and it also confirmed that a supporter was ejected from the ground and arrested after committing a racially aggravated public order offence. It is understood the supporter targeted Son, who did not hear any insults aimed at him, and the incident was reported to the authorities by other Chelsea fans.

A Chelsea spokesman said: “We are aware of an alleged racist incident involving a Chelsea supporter at yesterday’s match. Chelsea Football Club will not tolerate any form of racism, nor is there a place at this club for anyone who is found to have engaged in such behaviour. If a season ticket holder or member is involved, we will take the strongest possible action against them including bans. We will also support any potential criminal proceedings by the relevant authorities.”

There was at least one other clash among Tottenham supporters in the stadium where stewards were alerted to racist language after the first public announcement. One person was asked to leave by stewards and fans who reported the incident were contacted by Spurs on Monday.

A spokesman for the Met said: “Police were made aware of alleged racist chanting during the second half of the Tottenham vs Chelsea match on Sunday 22 December. Officers will work with the club in an attempt to identify any people responsible.”

Tottenham added that they are “exhaustively investigating” the allegations made by Rüdiger, promising to impose life bans on anyone found guilty. “We have engaged lip readers to study the footage and contacted Chelsea for further information from their players,” read a statement.

The Kalahari Desert of Botswana